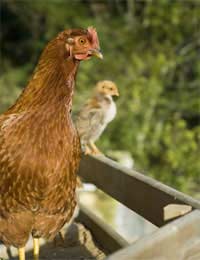 The most commonly kept livestock in the UK are chickens and hobby pigs. Hobby pigs are usually rare or small breeds that are kept almost as pets.

To keep chickens at home, you need a fenced or walled garden containing a pen (a twenty by forty foot one is enough for eight to ten birds), some grass for them to run around on if that’s not included in the pen.

The pen will need cleaning every three weeks or so. Home raised chickens are usually fed from a feeder (eight birds need a seven kilogram feeder which only needs filling every three days) which must be raised above the bedding on blocks and they need a water station outside.

It's easy for hens to spread diseases to each other, it's also vital to stop them creating messy puddles around their housing, so you can put down chipped bark in muddy areas. Don't use sawdust, as they tend to eat it! Eight birds will provide the average family with all the necessary fresh eggs during their laying season, as well as becoming meat when their laying life is over.

To produce regular good-sized eggs, chickens need to eat: grains, green-stuff, which can be grass or weeds, although some are poisonous, such as henbane, or if you only have a few poults, you can feed them waste vegetable parings from your kitchen, and protein, which in summer they obtain themselves from insects and worms but in winter needs a special supplement.

You can kill, draw and pluck your own chickens, or ask a local farmer to do it for you. Commercial chickens are killed around two years of age, while home-kept chickens may remain as egg-layers for up to five years before being slaughtered.

Pigs are a good idea for those who also produce their own vegetables on a substantial basis because they clear waste or fallow ground, fertilise it with their dung, eat any vegetable waste produced by your kitchen and give wonderfully tasty meat

Pig rearing requires a licence, so contact your Department of Agriculture to find out how to obtain your Pig Herd Number, which you need even if you only have one pig!

It is a very good idea to find out about slaughtering and butchering in your area before you make the investment in piglets. This is because it can be a very long journey to find an abattoir that takes home-reared animals, which is stressful for the livestock and for you. One advantage to finding a local abattoir is that they can also usually recommend a butcher to whom they will deliver your carcases to be butchered, so that you only have to drop off live pigs and then collect all your pork from another location, without having to shift the carcases around yourself. Alternatively, while there are regulations about home slaughtering which are extensive and complicated, some people prefer to arrange for a slaughterman to visit them at home, but again this needs planning for in advance.

The final point to note with pig raising is that a single pig fills a whole freezer! Be sure you have enough space to freeze all your meat, or you will have to give vast amounts of your pork away.

You will need a pig ark which is a rounded, pointed or square wooden structure, that IS warm and dry inside and is raised from the ground so that it doesn’t get damp. Despite their reputation, pigs do not defecate or urinate in their sleeping area, so it will remain clean for about a month. It does need a deep bed of straw which you simply sweep out of the ark and refill it. The pigs then trample the old straw into the ground around the ark, improving the soil. It is important to note that if you keep white pigs, they can suffer serious sunburn, so much have shelter from the sun all year round.

As well as housing, pigs need fencing, which is usually an electric fence. The ark and fence all need to be movable and you need to have enough space to relocate the pigs four times a year at least.

As is well known, until very recently, every family below the upper classes kept a pig in a sty at the bottom of the cottage garden. These swine were fed on kitchen rubbish and undersized or old vegetables. The problem with this idyllic picture is that swine fever was also endemic and travelled from pig to pig through that very waste. Many people who keep pigs now, feed them on a concentrated feed (which can be organic) and on home grown vegetables scraps. Defra can give you advice on feeding your breed.
Next Page

Live Livestock Exports
Share Your Story, Join the Discussion or Seek Advice..
Having seen the routine way of slaughtering chickens (stretching the neck between thumb and fingers), wouldn't it be just as humane in using an Air-rifle fired into the head while holding the chicken on a flat surface? Surely this would be quicker. Chris
chris - 15-Jul-12 @ 8:40 PM
Title:
(never shown)
Firstname:
(never shown)
Surname:
(never shown)
Email:
(never shown)
Nickname:
(shown)
Comment:
Validate: