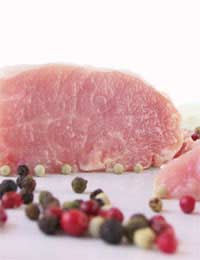 Pork is one of the most versatile meats for slow cooking, not just because it is tasty but because even processed pork meats such as sausage and bacon taste absolutely fabulous in soups and casseroles. There are few cuts of pork that can’t be slow cooked, but in particular the cuts to look out for are neck, tenderloin, shoulder, and fillet, all of which work well in the slow cooker. Neck of pork is rarely seen in supermarkets but you may find a local butcher or farm shop that sells it, it’s a very cost-effective meat with a superb flavour.

It’s vital to note that while pork can make fantastic, tasty, moderately-priced slow cooker meals, it must be adequately cooked. Pork is particularly rich in the parasite trichinella spiralis which causes an illness called trichinosis in humans if they eat undercooked pork but as long as the meat is cooked to an internal temperature of 160 degrees Fahrenheit or 72 degrees Celsius, this parasite along with the bacteria that are likely to be present on any meat, such as: salmonella, staphylococcus and listeria will all be destroyed.

Pork has several advantages for slow cooking: the meat is never tough and its dense texture doesn’t become stringy through overcooking as other meats can do. Large pork joints can be sliced easily with the leftovers being used in sandwiches and snacks and pork has very little cooking smell, so if you use a slow cooker, it doesn’t make the whole house smell strongly.

Pork’s dense light flesh and tender flavour works especially well if the accompanying flavours are slightly acidic – vinegar is one such seasoning, and the other traditional one is fruit: choose from pineapple, cranberries, apricots and the traditional and very tasty apple sauce! Spices that give a zing to pork are juniper, rosemary and sage and when cooking in a slow cooker or crock pot, pork cooks beautifully with vegetables such as carrots, celery and cabbage.

Slow Cooking Beef and Lamb: Using Cheaper Cuts
Share Your Story, Join the Discussion or Seek Advice..
@Kouki - the pork doesn't have to be cooked before putting it in the pot. The whole idea is to cook from raw over a long period of hours. Hope it tastes good. Jena
JJJ - 21-Nov-17 @ 3:32 PM
So, if I leave the crock pot on low setting for 6 hours, raw pork belly should be safe to eat, right? The recipe I'm following didn't specify if the pork had to be cooked or not before putting it in.
Kouki - 17-Nov-17 @ 11:09 PM
Hi I would like to know the temperature for cooking pork meat and sausage please. Many Thanks
kevin - 25-Jul-12 @ 12:11 PM
Title:
(never shown)
Firstname:
(never shown)
Surname:
(never shown)
Email:
(never shown)
Nickname:
(shown)
Comment:
Validate: