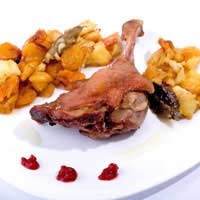 Goose has long be a traditional Christmas dish, but in the 1950s, it fell out of favour: there were two reasons for this, the first was that during the Second World War, battery farming was ‘invented’ and while chickens and turkeys could be kept indoors, geese wouldn’t tolerate it and the second was that people became fat conscious and were unhappy with the thick layer of fat that sits under the skin of a goose. This is a shame because nearly all the fat actually cooks out and doesn’t affect the fat content of the cooked bird.

The way to make the best of this fat is to cook the goose on a raised rack or large trivet over a roasting tin and to pour off the fat after cooking – you can either throw it away, or store it in a jar in the fridge for about three months, during which time you can use it to cook brilliantly tasty and crisp roast potatoes.

You need a large and deep roasting tin, preferably with a trivet or rack inside, tinfoil and some seasoning.

Because the meat is dense and savoury, goose complemented by citrus notes, such as carrots cooked in orange juice, parsnips with lemon butter, and cranberry or redcurrant sauce. Simple mashed potatoes are better with goose than roast ones, and you can save the goose fat for roast potatoes to serve with a less piquant meat.
Next Page