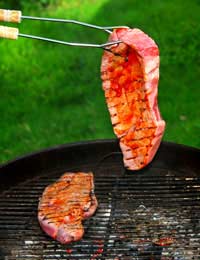 The consumer has a far greater power in ethical shopping practices than most people realise. Supermarkets are profit making machines, so they will produce, stock and sell whatever makes the most money for their shareholders.

What this means is that if the majority of us are canny, responsible shoppers, the supermarkets will listen because it will hit them where it hurts – their bottom line.

There is an incredible amount of research done on the behaviour of shoppers, which supermarkets use to consciously and unconsciously affect our choices. One of the best ways to be a more responsible shopper is to be a more intelligent shopper – understand the techniques used by supermarkets to get us to by certain products and don’t fall into the traps.

Popular supermarket design techniques include putting the fresh fruit and vegetable ‘loss leaders’ at the front of the shop. Until recently, the most popular product was bananas, and now it is soft fruit, such as strawberries and raspberries.

Very few people who come into the shop without a shopping list can resist – especially when they’re so cheap! So this not only gets you to buy something you were not looking for, but inevitably the fruit will have been flown in from across the other side of the world, dramatically increasing the food miles of the product. Far better to wait for Scottish or British strawberries in season.

The ‘buy one get one free’ and ‘three for two’ deals we see can be great if they are on something we were going to buy anyway, but if it is on chicken thighs, for example, perhaps we do not need them. Invariably they will have been intensively reared, transported, perhaps live, to a centralised location to be killed.

It is not only the lives of the chickens that is terrible here – by buying these products, essentially we are saying that we are happy with it, we agree with the treatment of these animals, we would rather have a trolley full of cheap meat. As the supermarket is making a sale and keeping their shareholders happy, they will continue the same. So if we don’t buy that packet of 24 chicken wings for £1.99, they will stop selling them.

There are plenty of alternatives to buying cheap, intensively reared meat. You could also chose to have a meat free meal for at least one dinner each week, or learn to use the whole of a chicken for a few meals rather than just buying the breasts. A knock on effect of being more aware of what we buy is that there will be less waste.

Over £20 billion worth of food is thrown away each year, so not only do we waste that hard earned money by giving it to the supermarkets for no reason, but we have used up packaging, food miles and resources and just put it into landfill.