Home > Questionniares > Questionnaire: What Kind of Meat Eater Are You?

Questionnaire: What Kind of Meat Eater Are You? 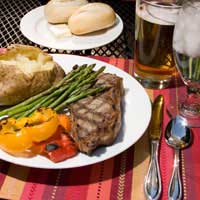 There is probably no food that has been so misunderstood in our modern diet as meat.

Since the 1950s it’s become an almost daily occurrence for one meat or another to appear in the news as being bad for us, and yet humans evolved to eat a diet including meat.

While some people choose not to eat meat for ethical or cultural reasons, many others are confused by these stories and don’t eat certain meats because of the ‘scares’ they’ve read about.

What kind of meat eater are you, and how much do you understand about the role of meat in a balanced diet?

A. Red meat is bad for you.

1 – Yes. Everybody knows that red meat causes all kinds of problems and diseases and clogs your arteries.
2 – Maybe. Some red meat can be bad for you, like mince that has a lot of fat included or eating fatty steaks every day, but red meat also provides lots of nutrients.
3 – No. Red meat is necessary for health, especially for people who do a lot of heavy work and a good amount of red meat most days of the week is essential if you want to be really strong and fit.

B. All red meats are full of fat.

1 – Absolutely. Red meat contains more fat than any other meat.
2 – It depends on the meat. Some red meat can be lean while other cuts can be very fat rich.
3 – No. Red meat is not what contains the fat, it’s the way you cook it that matters.

C. Eating meat is natural, it’s what we’re adapted to do.

1 – Rubbish. Humans are really vegetarians who ate meat only rarely, when the hunters could catch it.
2 – Yes and no. We did evolve to eat meat regularly, but it wasn’t farmed meat like we eat today but lean animals that were hunted down and probably our ancestors didn’t eat as much meat as we do and had a diet that balanced vegetables and meat.
3 – Totally right. Man the hunter adapted to catch and eat meat and our bodies become weak if we don’t eat it on a daily basis.

D. Cooking meat can be dangerous as it is full of bacteria.

1 – True. Meat has salmonella and other horrible things in it and if you don’t cook it perfectly you could cause people to become ill.
2 – Possibly true. Some meats require careful cooking, like chicken for example, but it’s no more difficult to cook meat safely and well than to cook anything else.
3 – Untrue. Meat is easy to cook, people have been doing it for centuries without problems.

E. Meat has advantages over other foods.

1 – Rubbish. Meat is worse for you than other foods.
2 – Maybe. Meat is a good source of some nutrients but if you are careful you can get the same balance in a vegetarian diet.
3 – True. Meat has a better range of nutrients than anything else.

Mostly 1 – You are a meat miser. You believe, wrongly, that meat is a difficult food to cook well – in fact, lentils and green beans, globally, cause as many health problems when wrongly cooked, as does meat. You also tend to think meat is bad for you and prefer to eat the vegetarian option. This is fine, as long as you are balancing your diet extremely well to ensure you get all the nutrients you need. But meat is probably necessary for most young people and teenagers especially, so take are not to deprive members of your family of its health giving benefits, especially if you have children or teenagers in the house.

Mostly 2 – You understand that red meat can provide nutrients such as zinc, in which teenagers are often deficient, as well as protein which is essential to grow strong muscles and organs and the complete range of amino acids that are vital to good health. You also know that the way you prepare the meat and cook it are as important as the meat itself and you take care not to add to the fat in a meal while ensuring it is properly and safely cooked. You are a balanced meat eater.

Mostly 3 – You’re a meat lover. You believe no meal is complete without a slab of meat on the plate, but this may cause you health problems in later life, as cholesterol can build up if you eat large amounts of meat, especially red meat, on a regular basis. Experiment with smaller portions of meat and meat-free days, which will increase your appreciation of your steak or lamb when you do get it!